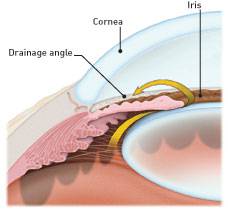 If the drainage angle is blocked, excess fluid cannot flow out of the eye, causing the fluid pressure to increase.

Glaucoma can cause blindness if it is left untreated.

When glaucoma develops, usually you don't have any early symptoms and the disease progresses slowly. That is why it is called "silent thief of sight". Fortunately, early detection and treatment can help preserve your vision.

There are several types of glaucoma:

Typically, open-angle glaucoma has no symptoms in its early stages and vision remains normal. As the optic nerve becomes more damaged, blank spots begin to appear in your field of vision. You usually won't notice these blank spots in your day-to-day activities until the optic nerve is significantly damaged and these spots become large. If all of the optic nerve fibers die, the result will be blindness.
Half of patients with glaucoma do not have high eye pressure when first examined. That is why it is essential that the optic nerve be examined by an ophthalmologist for proper diagnosis.

Although normal eye pressure is considered a measurement less than 21 mm Hg, this can be misleading. Some people have a type of glaucoma called normal-tension, or low-tension glaucoma. Their eye pressure is consistently below 21 mm Hg, but optic nerve damage and visual field loss still occur. People with normal-tension glaucoma typically receive the same methods of treatment used for open-angle glaucoma.

Closed-angle glaucoma
A less common form of glaucoma is closed-angle, or narrow-angle, glaucoma. Closed-angle glaucoma occurs when the drainage angle of the eye becomes blocked. Unlike open-angle glaucoma, eye pressure usually goes up very fast. The pressure rises because the iris - the colored part of the eye - partially or completely blocks off the drainage angle. People of Asian descent and those with hyperopia (farsightedness / long sight) tend to be more at risk for developing this form of glaucoma.

If the drainage angle becomes completely blocked, eye pressure rises quickly resulting in a closed-angle glaucoma attack. Symptoms of an attack include:

A closed-angle glaucoma attack is a medical emergency and must be treated immediately.

People at risk for closed-angle glaucoma should avoid over-the-counter decongestants (usually taken for common cold) and other medications contraindicated in glaucoma (mentioned in the drug packing / pamphlet).

What are the symptoms of glaucoma?
In its early stages, glaucoma has no symptoms. As the disease progresses and more damage occurs, blind spots develop in your peripheral (side) vision. These spots may not be noticeable until the optic nerve has become severely damaged - or until detected by an ophthalmologist during a complete exam.

People with "normal-tension glaucoma" may have eye pressures within normal ranges, but have glaucoma signs and symptoms, such as blind spots in their field of vision and optic nerve damage.
Some people may not have glaucoma symptoms, but may have higher than normal eye pressure (called ocular hypertension). They are considered "glaucoma suspects," and should be monitored carefully by an ophthalmologist.

Who is at risk for glaucoma?
Some people are at greater risk for developing glaucoma and should see their ophthalmologist on a regular basis, specifically for glaucoma testing. Risk factors for glaucoma include:

How is glaucoma diagnosed?
One of the problems with glaucoma, especially open-angle glaucoma, is that there are typically no symptoms in the early stages. Many people who have the disease do not know they have it. This is why it is important, especially as you get older, to have regular medical eye exams by an ophthalmologist.

The eye examination
In a glaucoma evaluation, your doctor:

Tonometry exam
During this test, your eye is numbed with eyedrops. Your doctor uses an instrument called a tonometer to measure eye pressure.  The instrument measures how your cornea resists pressure.
Normal eye pressure generally ranges between 10 and 21 mm Hg.

The visual field test will check for blank spots in your vision. The results of the test show your ophthalmologist if and where blank spots appear in your field of vision - including spots you may not even notice.

The test is performed using a bowl-shaped instrument called a perimeter. When taking the test, a patch is temporarily placed on one of your eyes so that only one eye is tested at a time. You will be seated and asked to look straight ahead at a target. Random points of light will flash around the bowl-shaped perimeter, and you will be asked to press a button whenever you see a light. Visual field testing is usually performed every 6 to 8 months to monitor for change.

Because the thickness of the cornea can affect eye pressure readings, pachymetry is used to measure corneal thickness. A probe called a pachymeter is gently placed on the cornea to measure its thickness.

OCT is a non-radiation mode of scanning that utilizes certain light waves for the scan.

OCT can show the tissue in detail almost as if in biopsy (layer by layer). The resolution of the Spectral OCT scan available in MEH is 5 microns. Such highly precise scans help your doctor diagnose your condition and monitor progress quite effortlessly. 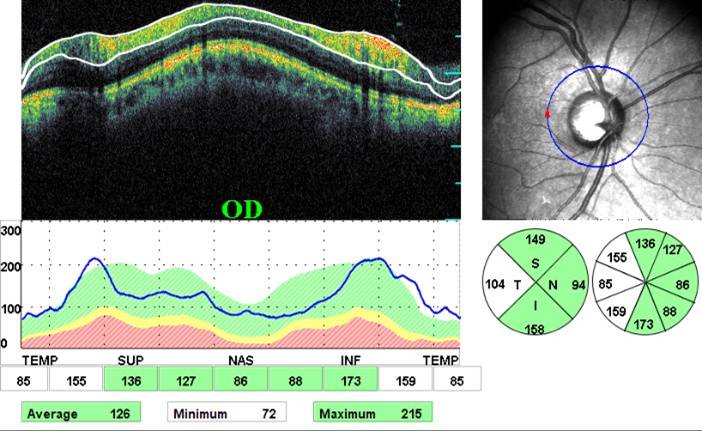 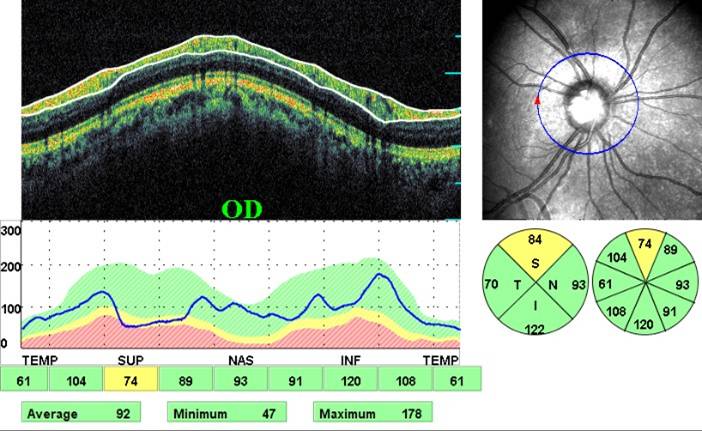 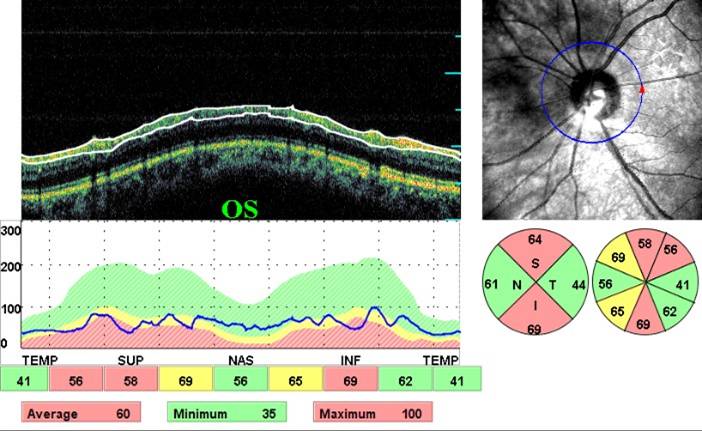 OCT and the Angle
OCT can be used to measure the angle of the eye (from where the aqueos fluid is supposed to drain out) and assess the likelihood of angle closure glaucoma. OCT can also be employed to verify whether the angle has opened up after laser treatment for glaucoma (ALT, SLT or YAG Iridotomy).

OCT and Pachymetry
OCT scan of the cornea provides a true optical measurement of the corneal thickness. This influences the choice of treatment and hence is a useful tool in glaucoma treatment.

Early detection and treatment can protect your vision.

People of any age with symptoms of or risk factors for glaucoma, such as those with diabetes, a family history of glaucoma, or those of African descent, should see an ophthalmologist for an exam. Your ophthalmologist will let you know how often to return for follow-up exams.

Adults with no symptoms of or risk factors for eye disease should have a complete eye disease screening by age 40 - the time when early signs of disease and changes in vision may start to happen. Based on the results of the initial screening, your ophthalmologist will let you know how often to return for follow-up exams.

Adults 65 or older should have an eye exam every one to two years, or as recommended by your ophthalmologist.

If you have glaucoma, preserving your vision requires strong teamwork between you and your doctor. Your doctor can prescribe treatment, but it's important to do your part by following your treatment plan closely. Be sure to take your medications as prescribed and see your ophthalmologist regularly.

How is glaucoma treated?
How your glaucoma is treated will depend on your specific type of glaucoma, the severity of your disease, and how it responds to treatment.

Medicine
Medicated eye drops are the most common way to treat glaucoma. These medications lower your eye pressure in one of two ways - either by slowing the production of aqueous humor or by improving the flow through the drainage angle.

These eye drops must be taken every day. Just like any other medication, it is important to take your eye drops regularly as prescribed by your ophthalmologist.
Never change or stop taking your medications without consulting your doctor.

Surgery
In some patients with glaucoma, surgery is recommended.  Glaucoma surgery improves the flow of fluid out of the eye, resulting in lower eye pressure.

During ALT surgery, a laser makes tiny, evenly spaced burns in the trabecular meshwork. The laser does not create new drainage holes, but rather stimulates the drain to function more efficiently.
SLT treats specific cells and leaves the mesh-like drainage canals surrounding the iris intact. SLT may be an alternative for those who have been treated unsuccessfully with traditional laser surgery or with pressure-lowering drops.

Even if laser trabeculoplasty is successful, most patients need to continue taking glaucoma medications. For many, this surgery is not a permanent solution. Nearly half who receive this surgery develop increased eye pressure again within five years and need to have a repeat treatment.

Laser iridotomy
Laser iridotomy is recommended for treating people with closed-angle glaucoma and those with very narrow drainage angles. A laser creates a small hole about the size of a pinhead through the top part of the iris to improve the flow of aqueous fluid to the drainage angle. This hole is hidden from view by the upper eyelid.

Trabeculectomy
In trabeculectomy, a small flap is made in the sclera (the outer white coating of your eye). A filtration bleb, or reservoir, is created under the conjunctiva - the thin, filmy membrane that covers the white part of your eye. Once created, the bleb looks like a blister on the white part of the eye above the iris, but the upper eyelid usually covers it. The aqueous humor can now drain through the flap made in the sclera and collect in the bleb, where the fluid will be absorbed into blood vessels around the eye.
During surgery, the scleral flap is closed with tiny stitches. Some of these stitches may be removed after surgery to increase drainage. Medication to reduce scarring is often used during and after surgery.
Eye pressure is effectively controlled in three out of four people who have trabeculectomy.

Important things to remember about glaucoma:

There are a number of ways to treat glaucoma. While some people may experience side effects from medications or surgery, the risks of side effects should always be balanced with the greater risk of leaving glaucoma untreated and losing vision.